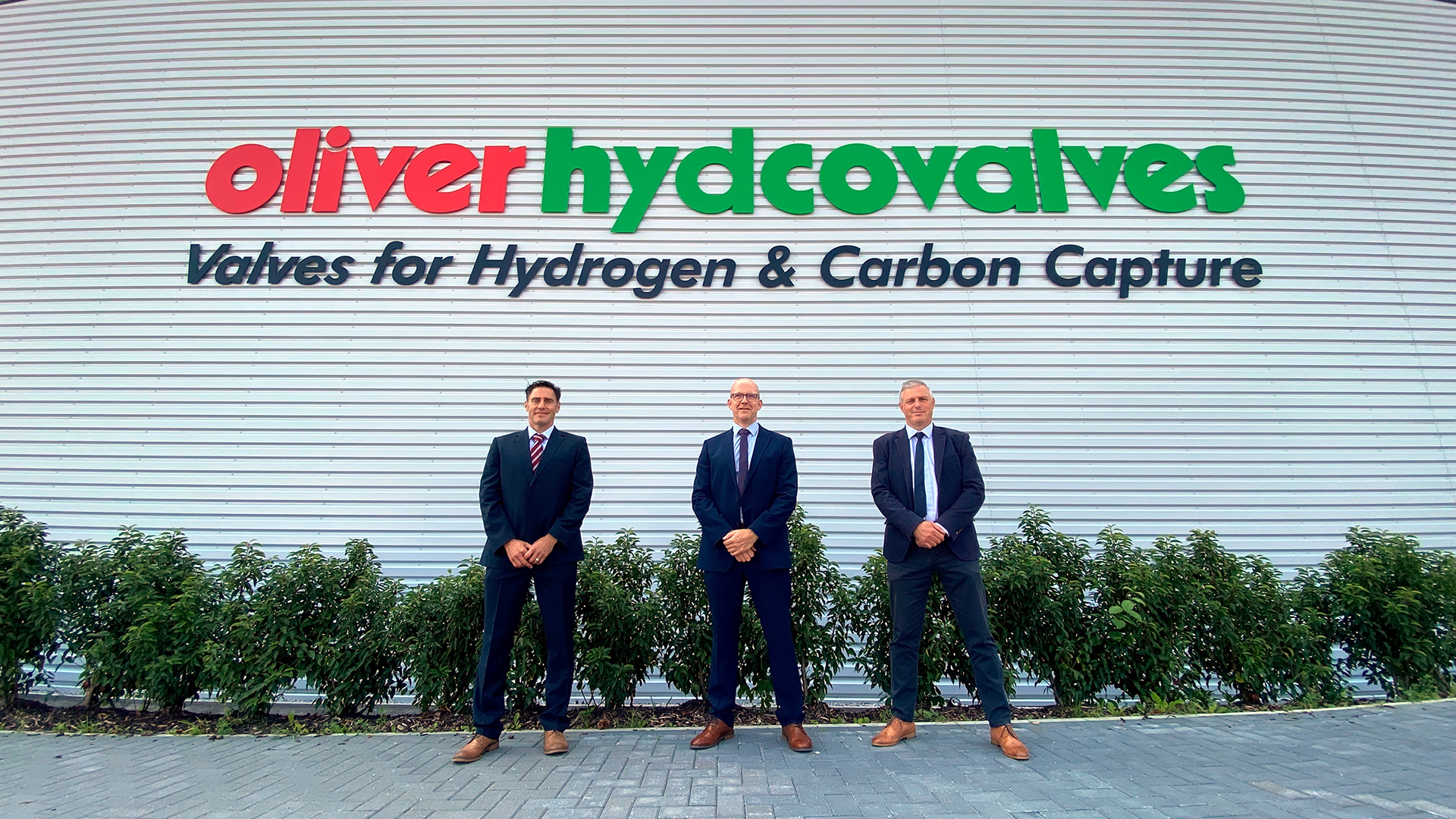 Rob arrived at the office earlier than usual on the morning of July 15th . With all the expertise of a professional movie director, he perfectly framed the end of the new Oliver Valves building in the lens of his mobile device and pressed record. Walking to the office, he was safe in the knowledge that later that day we would have a timelapse movie worthy of an Oscar. Yes, it was going to be a big day, the new Oliver Hydcovalves sign was to be installed on the end of one of the fantastic new buildings here in Knutsford. It was the first really big sign to the outside world that we are officially open for business.

Only later did we discover that the extremely hot weather we had on the day had overwhelmed Rob’s recording equipment forcing it to shut down after only a short time recording, sadly dashing Rob’s hopes for that elusive Oscar. A funny story that highlights the now well documented fact that the world is getting warmer…at Oliver Hydcovalves we plan to help industry do something about that.

Although the landmark 2015 Paris Agreement draws a line in the sand for limiting global warming to 1.5°C by 2050, many Governments around the globe recognise the need to cut greenhouse gas emission well in advance of the 2050 deadline in order to achieve the 1.5°C limit.

Oliver Hydcovalves recognises that those sectors that are now identified as “hard to abate” i.e., where switching to less environmentally impactful operations is not possible or extremely difficult; will need to adopt alternative, high density fuel sources such as Hydrogen, and/or invest in technologies that capture greenhouse emissions from their activities.

100 000 valve operations! Sounds like a lot, and in comparison to previous Oliver Valves endurance tests it is, however, this is just the entry level qualification for a new market that Oliver Hydcovalves will be targeting.

The development of a hydrogen infrastructure, including fuelling stations for high energy dependent vehicles is forecast to be an integral part of the global objective to reduce of carbon emissions and a sector that is expected to grow rapidly over the next five years.

To gain entry into this new sector Oliver Hydcovalves will be developing a bespoke 10mm PEEK seated ball valve to meet the requirements of the fuelling station standard ISO19880-3:2018.

The qualification test will consist of over 100 000 operations at pressure of 10 000psi with 1000 cycles at maximum temperature and 1000 cycles at minimum temperature. For our in-house testing, Helium will be used as the test media due to its inert nature and molecular similarities with Hydrogen. However, further outsourced testing using hydrogen will be required in the future.

The existing electronically controlled systems in R&D comprising of torque transducers, programmable logic controllers and digital data acquisition will be used to operate the valves through the qualification. Periodic fugitive emissions testing using the mass spectrometer will be carried out throughout the test.

Like all good inventions, the design is a combination of well proven technology. Based on the 14mm Oliver Valves floating ball valve but with a 10mm reduced bore, the valve will feature increased spindle support and the Oliver Valves designed PEEK and elastomer fugitive emissions gland arrangement. An increased bore to sphere radii has been incorporated into the ball design to improve longevity of the seats through operations.

In comparison to previous endurance qualifications, this is worlds apart however it will not be the completion of the test that we will benefit most, but the lessons that are learnt throughout the development.

Opportunities in a Green Economy

The drive for evermore renewable energy sources and reduction of greenhouse emissions continues at a relentless pace; but will need to accelerate in order for the targets of the Paris agreement to be met. New technologies are emerging on an almost daily basis, but clearly only those that require some form of valve technology will be considered with interest.

Hydrogen and potentially Ammonia are seen as key, high density energy alternatives to traditional fossil fuels. Production, storage, transportation and utilisation of both gas and liquid phases of these medias are seen as ideal targets for Oliver Hydcovalves technology.

Carbon Capture and Storage or CCS, entails deploying one of several methods to capture the CO2 emissions from the combustion of fossil fuels, compressing and transporting it (sometimes for industrial use) and then storing it underground or below the seabed, often in now depleted natural gas or oil reservoirs.

The current front runner in capture technology uses a liquid amine chemical reaction to remove the CO2 from the flue gases. Whilst there are clearly valves utilised in such a process, they are likely to be required only to withstand relatively low heat and pressure; these applications will be targeted with low technology valve products available through Oliver Valves’ existing, low-cost supply chain.

The most cost-effective transportation method for CO2 will be via pipeline. Though it is envisaged that re-tasking of existing gas pipelines will give immediate access to existing infrastructure, much more will be required to be built from scratch. Although development of pipeline safety standards for CO2 transport continues, public fears over large-scale emissions from such pipelines will undoubtedly lead to stringent safety requirements. Valves from the Oliver Twinsafe range have been meeting these demands for many years and will be targeting both conversions and new infrastructure projects. Should lower safety requirements be deemed acceptable, we will consider developing a single isolate range based on the tried and tested Twinsafe design.

As every day passes, the newly formed Oliver Hydcovalves team understands more and more the market, business expectations, and the opportunities we can expect from a “Greener Future”, whilst maintaining a clear objective to reduce carbon emissions globally.

Our market research shows that we have already played a major part the building of infrastructure when Valvetek recently secured its first order for products utilised as part of the Northern Lights carbon capture and storage project; outlined in the image above. In this case, one key customer has designed specific technology that will be capable of being deployed in both the production of traditional fossil fuels but also has the capability to be used on CCS applications.

We are already seeing that CCS projects are starting to gather pace, with a growing number of opportunities globally. The UK are leading the drive with large financial incentives from government.

New technologies are appearing with pace, illustrating that CCS will play a part in all our futures. However, we must also consider that older technology and infrastructure will play a vital role in the CCS market expansion. Deployment in large scale industrial zones or clusters, will probably utilise existing depleted wells to store captured CO2 leading to the need to upgrade existing infrastructure.

With growing opportunities in both upgraded and new CO2 capture infrastructure, we ask that all our sales teams to look out for any projects that may have a mention of CCS or Hydrogen. Please feed these in to the Oliver Hydcovalves team, Tony, Myself and Nick and we will work closely with you to ensure that we are able to lead the drive on all Carbon Capture and Storage opportunities. 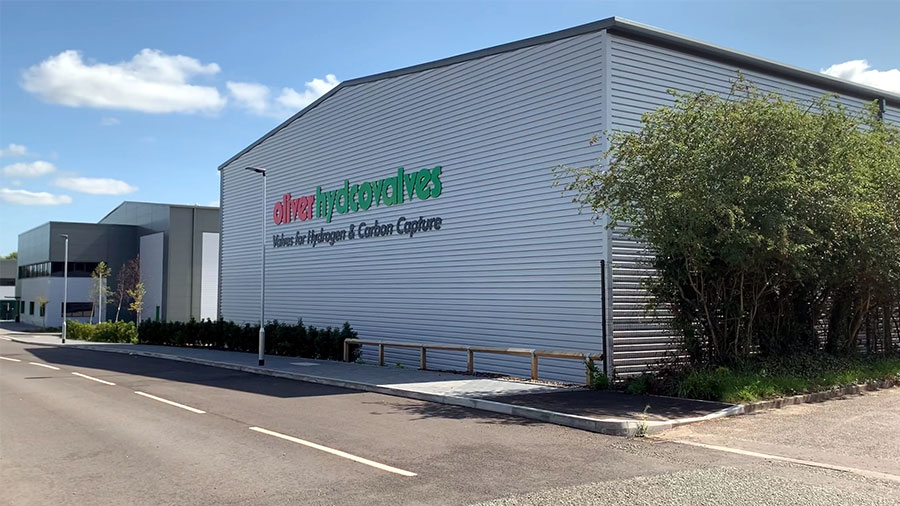 Opportunities In A Green Economy – Oliver Hydcovalves. On A Mission To Penetrate Emerging Markets.

Get in touch & work
with Oliver Hydcovalves Today